The Go-To Source for 100 Years of Safety Facts 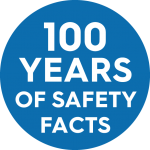 In 1921, when the National Safety Council published its first statistical summary, An Analysis of Public Accidents, there was no centralized source for injury statistics for the United States. The committee of volunteers tasked with developing the publication collected public injury statistics from 36 representative cities, life insurance companies and other sources.

As the scope of the publication expanded, its various titles reflected the changing content. Known as Accident Facts® from 1927 through 1998, the title changed to Injury Facts® in 1999 as part of the Council’s effort to communicate that unintentional injuries are preventable.

Most recently, in 2018, Injury Facts® transitioned to an online publication and ceased printing of the annual book. Statistical data now is updated on a continual basis, and the number of topics covered are no longer limited to the number of pages in the book. The National Safety Council and the Injury Facts® team look forward to many more years providing a comprehensive and reliable account of preventable injuries and death for the United States and the world.

Covering the Facts: Injury Facts® Artwork Through the Years

Below, you will find a selection of Injury Facts® cover art, courtesy of the NSC Library. Click on any cover to get a closer look.

The Go-To Source for 100 Years of Safety Facts
Also of Interest: